Dr Randall Smith – Paul, His Life & His Writings, Session 6: The Letter to Titus

This DVD is Session 6 of a six-part series.

Scroll down for a description and a short preview clip.

In Session 6, The Letter to Titus, Dr. Randall Smith shows that Paul wanted all the work he did to move past his own hands. He knew the days ahead were short and wanted to “pass the torch” in Pastoral Epistles (1 and 2 Timothy and Titus). Though in his early sixties, he was imprisoned again, and this time Nero wasn’t going to let him go.

First of all Dr Smith reviews the story of Paul’s life to set the stage. He speaks about the challenges of presenting Jesus in the face of persecution. How hard was it for a Roman citizen in the time of the apostle Paul to come to Christ? We need to follow the pattern of the early church as they took on the daunting task with the Spirit’s guidance.

Next, he considers what we know of Mission Pastor Titus as the recipient of the epistle. The missionary church planter Titus probably came to Jesus during the preaching and teaching ministry of Paul (Titus 1:4), and became his disciple shortly after. Please follow Dr Smith as he outlines the key principles Paul laid down for Titus, but also for us to moving forward as believers in a body. 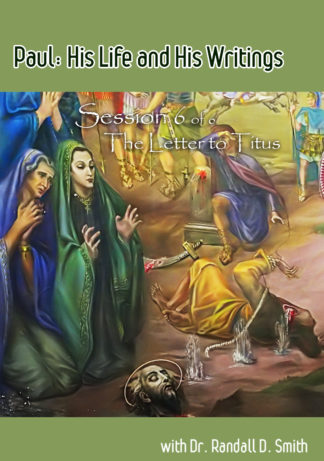 You're viewing: Dr Randall Smith – Paul, His Life & His Writings, Session 6: The Letter to Titus R95.00
Add to cart