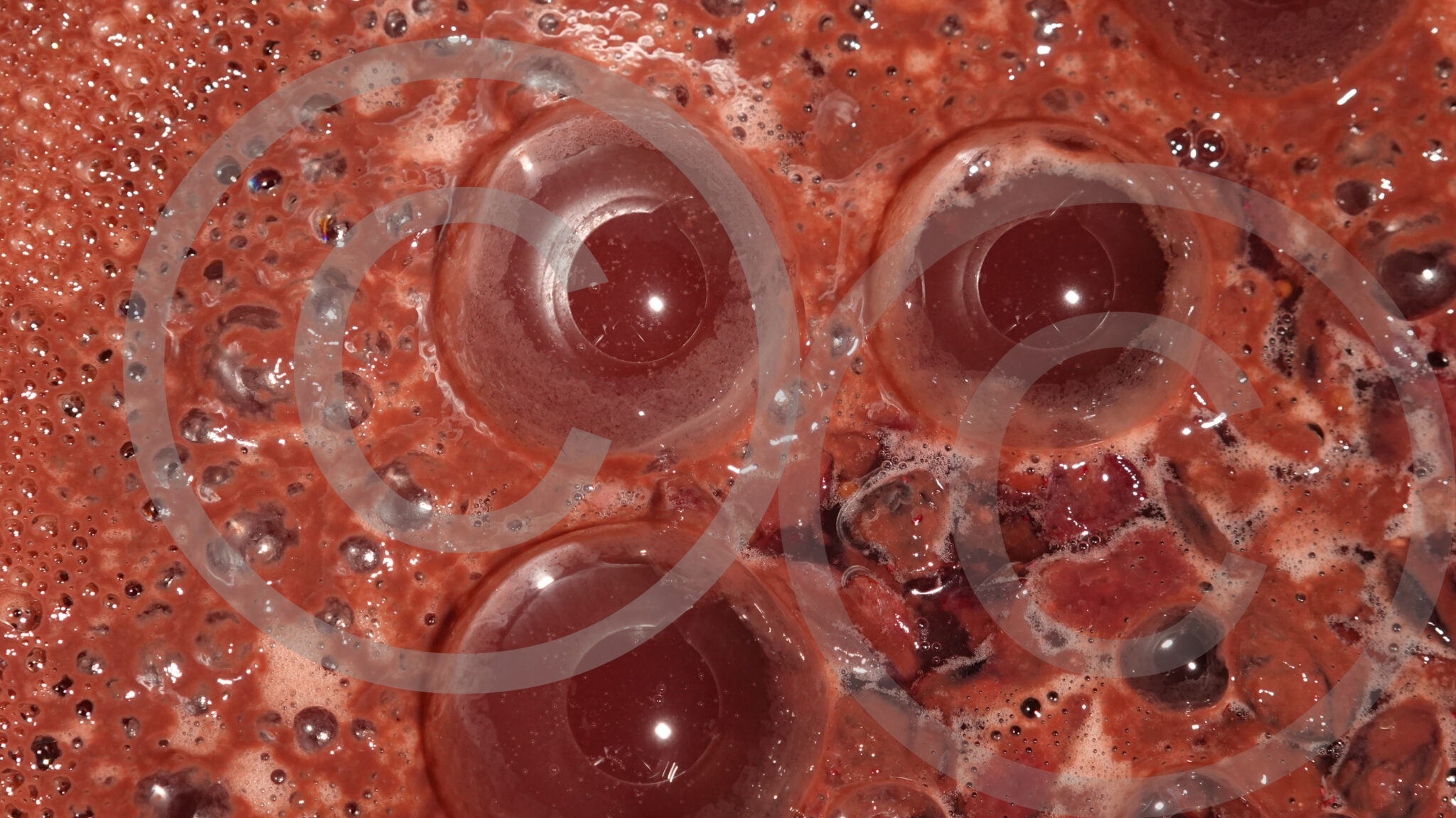 The copyright sign on this picture is just temporarily, because we do not want it to be used before it has been published officially.

During my research on the use of wine in the Bible, I came across Proverbs 23:31. In the NKJV it reads as follows:

“Do not look on the wine when it is red, when it sparkles in the cup, when it swirls around smoothly.”

During lockdown we had time to do a few experiments. Experiments from which we learned a great deal about ancient wine making techniques. It is of course very different from the techniques involved in producing the wines of today. The problem for me was that the translation of Proverbs 23:31 in all the Bibles that I could lay my hands on, made no sense at all. In Hebrew we find the word “eye” (ayin) in that verse, but also in two verses before and one following that one. In those verses we read:

The same word ayin appears also in verse 31, but each and every Bible translates it in a way that means everything except “eye”. Nowhere could I find a Bible that translates the word ayin in Proverbs 23:31 as “eye”. Different translations just omitted the word. And the rest of the translation of the verse was equally unclear. What was it that Solomon said?

These questions compelled us to go to the nearby wine estate of the Dreyer family, RAKA Wines, to hear if they could help us to press grapes and to allow fermentation to take place as was done in Biblical times. The farm manager, Pieter, and his brother, the winemaker, Josef, were immediately ready to help us. What an experience it was!

From the grapes that were offloaded at the cellar, Pieter put some in a basin. Marina kicked off her shoes and treaded the grapes as was done in antiquity. Pieter poured the ‘must’ (as they call the juice) through a bunch of treaded stems that he took from the basin, into a bucket. This was how they filtered the ‘must’ in antiquity in Israel. We were amazed to see how effective the stems were in filtering the ‘must’, because the juice that was poured into the bucket was quite clear of grape skins and stems.

Then Pieter added the same amount of water to the pressed grapes, as the amount of ‘must’ that was drained into the bucket. This Marina treaded again, which Pieter also drained with the stems and poured it into a second bucket.

The first bucket’s ‘must’ is the so called “royal wine” (Esther 1:7) or first grade wine that was made in antiquity. This is what was called in John 2:10 the “good wine” that was served, mixed with four parts of water, at the beginning of the seven day marriage feast. The ‘must’ in the second bucket is the second grade wine known as posca and described in John 2:10 as the “inferior wine” or wine of “inferior quality”. This second grade wine, mixed with three parts of water, is the wine that was served during the rest of the feast, once the “first grade wine, served on the first day, was finished.

Marina and I then went to RAKA daily, to film the two buckets of fermenting ‘must’ for a few minutes each day, to see if we could learn anything from it. On the seventh day when we lifted the cloths, we were astonished, as it looked as if the bucket had suddenly become alive. It’s contents looked us straight in the eye! And we could not believe our eyes! What you see in the picture above are the eyes with which the ‘must’ “looked” at us. I believe this is what Solomon referred to when he wrote:

“Do not look at the wine when it has turned red when it is giving its eye in the reservoir and is being drawn off carefully.”

Right in the beginning, when the ‘must’ was filtered through the stems, it had a pinkish-red color. Since then we could not really see the color, as it was covered with a layer of fermenting foam. But now we could see the ‘must’ again through these “eyes”. It now had a deep red color and on top of that, there were these bubbles that looked like human eyes. It was almost too good to be true! The discovery of these “eyes” was a huge breakthrough because it helped us to understand more fully about winemaking in antiquity and what Solomon was referring to.  We knew that the ‘must’ had to ferment until it had to be drawn off carefully into earthen jars, amphorae, and wineskins. All the little pieces that were not filtered out were now at the bottom and at a specific stage, the ‘must’ had to be separated from these dregs. If this did not happen at the right time, the ‘lees’ would spoil the taste and smell of the ‘must’ (Ref. Jeremiah 48:11-12). Now we learned that when the ‘must’ gave this “eye”, it was time to separate the ‘must’ from the ‘lees’. It had to be done carefully to prevent the sediment from mixing with the ‘must’ again. After this, fermentation continues, until it is fermented “dry”. In antiquity, during the few days that it was drawn off until it was finally fermented “dry”, they called it “new wine” (Matthew 9:17).

I just want to make it clear that this wine smelled and tasted awful. I put my finger in the ‘must’ and tasted a drop of it and it felt like a snake had bitten me on my tongue. Pieter Dreyer did the same and said, “Yuk, this ‘must’ tastes awful!” Even the following day that bad taste was still in my mouth. Then I understood what Solomon meant by saying in the next verse: “At the last, it bites like a serpent, and stings like a viper” (Proverbs 23:32). In stark contrast to today’s red wine with its up to 15% alcohol content, this first-grade wine only contained 6% alcohol. However, in antiquity, it was not drunk undiluted but was diluted with three to four parts of water. The wine, or rather the alcohol in the water, was served to disinfect their water. In the same way municipalities, these days purify our drinking water by adding chlorine to the water. In antiquity, they also added sweeteners like honey and other things to improve the taste of the water, which they called “wine” (yayin or oinos).

Jesus changed water into wine, knowing that the wine prophetically pointed towards “something” that the wedding guests would not understand at that time. He revealed His glory that day by creating a wine which pointed to His blood that He would shed on the cross, to purchase people for His Father.

The Lord Jesus paid the price for each of us with His blood. Do you believe in Him?

Kerugma Productions. values your privacy. In order to understand how people use our site generally, and to create more valuable experiences for you, we may collect data about your use of this site (both directly and through our partners). By continuing to use this site, you are agreeing to the use of that data.

Subscribe to Kerugma Bulletin and ONLY be notified on new developments, news, prayer requests, or the release of a new DVD.