Dr Randall Smith – Paul, His Life & His Writings, Session 4: Letters to Philemon and the Philippian Church

This DVD is Session 4 of a six-part series.

Scroll down for a description and a short preview clip.

In Session 4, Letters to Philemon and the Philippian Church, Dr Randall Smith explains that while Paul was under house arrest, he had some time on his hands, with the result that he could write the so called “Philosophical” Epistles, Ephesians, Philippians, Colossians and Philemon. This Session consists of two parts. In part one, filmed live on tour in Italy, he begins by elaborating on Paul’s treatment of a runaway slave in his letter to Philemon.

In part 2 Dr Smith starts to expound the letter to the Philippian church. He shows that, being under house arrest, we can surmise a number of things about what Paul was going through, namely the progress was slowed, attacks increased and divisions began to show.

Paul sent a letter to the Philippians under the Spirit’s command, beginning with a prayer (1:1-11). When problems are mounting and people are being pushed apart, it is easy to lose our way in the troubles and frustrations, but Paul knew the secret to not being dragged down into the problems. Please watch this DVD and discover how he was able to finish the race without being discouraged. 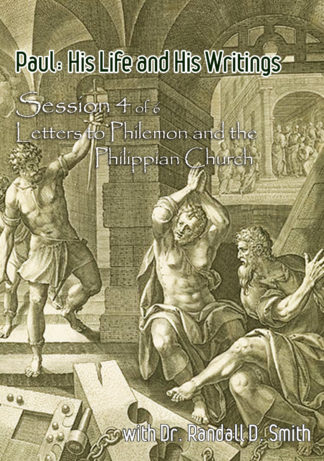 You're viewing: Dr Randall Smith – Paul, His Life & His Writings, Session 4: Letters to Philemon and the Philippian Church R95.00
Add to cart